The Alkalos Jahanka in The Gambia and Kerr Seny in Senegal have called on the Governments of The Gambia and Senegal to take urgent measures to demarcate the border between the countries in that area so as to bring an end to the land dispute between the two villages.

Alkalo Mod Talla Boye of Jahanka and Alkalo Elhadji Mamgorr Boye of Kerr Seny made these remarks when they were interviewed separately by Foroyaa. This follows a clash between the two villages during which a gunshot injured a villager from Jahanka. 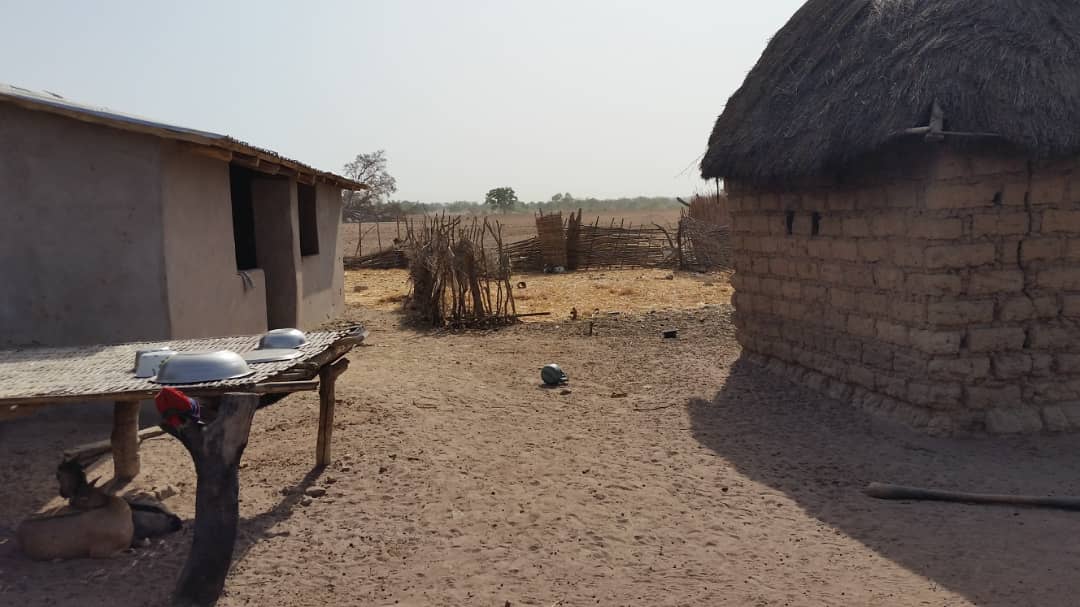 Meanwhile Gambian security forces have now stationed themselves at the outskirts of Jahanka village following the worst clash between the residents of Jahanka and a group of armed men from Senegal, who descended on the village on a Monday morning attack on the village. The joint security forces comprise soldiers, Police Intervention Unit (PIU), NIA and Prison warders who were seen stationed near the mosque of Jahanka while others went for patrol duties.

At the height of the event, women, children, students and the school master together with his family fled their homes to other settlements as the border dispute erupted into violence. But calm has returned since the deployment of troops but this is just uneasy calm.

Jahanka villagers are still concerned that they may be attacked and fear travelling to neighboring Senegal due to the threats.

The reporter was also showed where the fight and gun-shot occurred.

Villagers from both sides of the border say that the lack of demarcation of the border has been lingering for many years now as tension builds up. The land area between the two border villages which seems to be less than a kilometre has served a thorn in their flesh all these years. It has been undermining the relationship between Jahanka and the cluster of villages across the border which they have been enjoying for many years.

Alkalo Mod-Talla Boye explained that they had a good relationship between their neighbors but that the attack on them is rooted in the border dispute. He said that the Casamance people are claiming ownership of land while a demarcation has not been finalised to be able to determine which side belongs to Gambia or Senegal.

Villagers from Jahanka and these villages say they have been living like neighbours, marrying one another, attending each other’s weddings and funerals, sharing the same language, culture and even surnames but they also share a history of land and timber dispute years ago which resulted to fears, fights, death, arrests and jail.

Officials from the Gambia such as Chiefs, Governor, Police Regional Head, NIA and other sister security outfits held crisis talks with the Jahanka Alkalo in his community. According to the Alkalo, they advised the community to remain calm and refrain from violence and assured them that the matter would be resolved soon.  But the villagers say since then they have not seen or heard of any dialogue to resolve this urgent matter.

After Friday prayers, the Jahanka Imam announced a message in the mosque sent by their Kahlifa-General in ‘Tiwawon’ Senegal urging the people of Jahanka people to continue exercising patience and maintain peace as Gambia/Senegal are brothers and sisters. He said Senegalese are fully aware of what is currently happening in both territories, so in that case they will also pray for peace to prevail on two sides.

One Mustapha Gueye of Kerr Yorro in Casamance, Senegal was found dead in Senegal and the people from the cluster of villages across the border in Casamance hold the people of Jahanka responsible for his death. This angered the Senegalese and, according to the Alkalo, villagers from six Senegalese villages descended on Jahanka for a revenge.

According to the Alkalo the Senegalese descended on their village on four occasions and when they came the fourth time they tried to prevent them from entering the village “because their target was to set fire onto our houses. In that push and pull, they shot the officer which is still paining the entire village. They did not come back as they threatened to do but it was due to the timely intervention of the soldiers,’’ he said.

According to him, on Thursday, the security forces advised them to stay in their homes and not to go to the border as the soldiers have taken control. ‘‘The officers told us to avoid violence and maintain peace until the authorities find a solution to the problem because their mission here was to calm-down the situation,’’ he said.

Alkalo Boye narrated: “Some of the armed men threatened me and three of my colleagues that wherever or whenever they set an eye on us they will kill us. Since then we took this threat seriously.” He said: “Two armed men were on Wednesday night arrested by the soldiers and handed over to Bansang Police. Soldiers are doing their night patrols in the village, so therefore our lives are in their hands.”

Asked whether they have held any talks with officials from the ministry of lands and regional government, he responded in negative, adding that he had tried to reach the minister but to no avail.

He made a desperate appeal for the two governments to act with speed using diplomacy to demarcate the boundary and put an end to this border crisis. ‘‘No one can identify which part belongs to Senegal or The Gambia, only the two governments can help us resolve the issue as soon as possible,’’ he remarked.

41-year old Bakary Mbye told Foroyaa that the school head closed the school after the attack for their safety and students have stayed away for about a week now. “A lot of students fled with their parents even the head master also fled. Students have missed classes because of the attack. It’s not safe to be in school because when a bullet is fired it can stray into the classroom, so that is why the headmaster asked the students to stay home. Grade 9 students were on mock-examination,’’ he said.

Mrs. Fatou Su said she and her children fled their home since the group threatened to return to the village, but that she was asked to come back after the troops took control. “Nowadays, we go to bed too early because someone can stand there and shoot at us since electricity is lacking in this hood,” she said.

In Casamance, Senegal an Assistant Alkalo of Kerr Seny, Elhadji Mamgorr Boye, advised that attacking Jahanka would only heighten the problem. He said he had been advising his people not engage in such violence as they are all related and marry one another.

“This violence erupted because the Senegalese people are still angry with the brutal murder of our citizen by a villager in Jahanka. They should have reported him to the security forces for lawful action rather than killing him brutality in our own country. You cannot even look at his corpse. The Casamance people still remain silent with this sadness but I also counsel to remain peaceful and let the authorities do their job,’’ he said.

Alaklo Boye called on the two heads of states to come and identify which side belongs to Gambia and Senegal, otherwise there could be more confusion and tension. He said as an elder of a community he and other elders are willing and ready for dialogue on the issue.

Mustapha Boye a native of Kerr-Touba Mboyen Senegal, said the entire Senegalese villagers are angry and sad about alleged killing of a loved one. He described the attack on Jahanka village as retaliation for the death of a Senegalese national.

“I saw the body of the young man who was beaten to death. It was terrifying. I was very shocked. What crime did he commit to receive such treatment from a Gambian? All we were doing was also trying to protect our land and forest because they are cutting down all our trees,’’ he said.

According to Boye they are not at all happy about the death of Mustapha Gueye; adding that he sees Gambia and Senegal as brotherly countries that should not be killing one another. “We are not clamouring about any land but death operated in Senegal by a Gambian. And on Wednesday, security forces have arrested two Senegalese but we do not know their whereabouts,” he complained.

This has been the case with Jahanka for a very long-time, he said; stating that only the two governments can discuss the matter maturely and resolve the problem. “Let them come and demarcate the area so that we would not bother them again because we also want peace,” he said.

Share
Facebook
Twitter
Pinterest
WhatsApp
Previous articleAgric. Minister Receives 1,000 Tonnes of Fertilizer
Next articleWill The State Give A Report To The National Assembly On The 1.45 Billion Euros Pleged During The President’s Trip To Brussels?
- Advertisement -