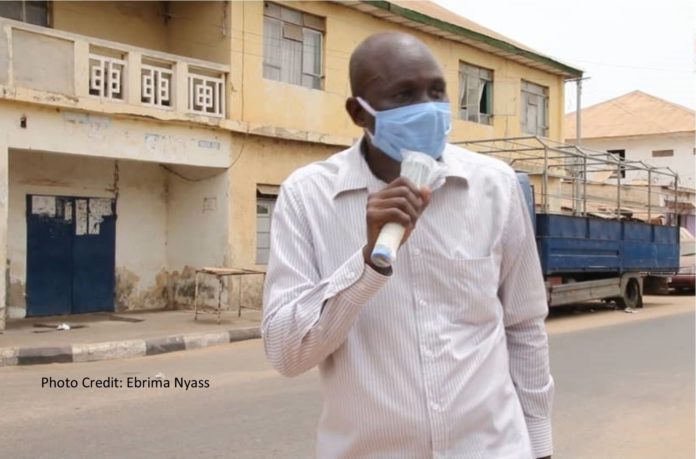 Ousman Sillah, National Assembly Member (NAM) for Banjul North, on Saturday 30 May, 2020, was out and about in the streets of his constituency engaging constituents on COVID 19 related issues.

This was the second time since the outbreak of the pandemic in the Gambia in March 2020 that the Banjul North NAM was on the ground sensitising people and urging them to pay heed and adhere to the precautions and advice given by the World Health Organisation (WHO) and the Ministry of Health on breaking the chain of transmission of this highly contagious and deadly virus. 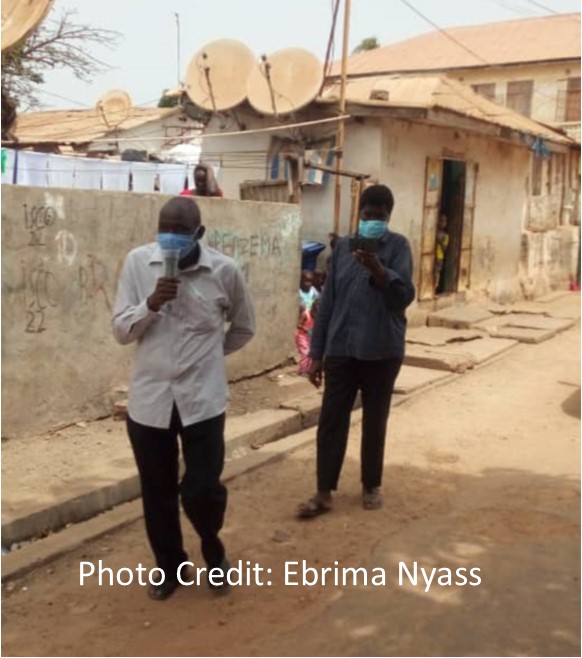 Going round through the streets of the three wards in Banjul North constituency, with a public address (PA) system mounted on a moving vehicle, Hon. Sillah was emphasising the existence of the Covid 19 virus in the country and the need for people to take it seriously.

He told them it was his duty as an elected representative to bring to their attention everything that serves or goes against their interests. He further told them that the Covid 19 virus is a disease that can harm them.

He said: “This is the reason why I am out and about this morning to inform you the constituents of Banjul North that covid 19 is real and is here in the Gambia and as such we need to do everything possible as individuals and as a community to contain and curb its spread,” said Hon. Sillah.

The Banjul North NAM said he was also out to hear from the people what their concerns are in terms of the enforcement and compliance with the regulations and any other challenges which they feel he should be informed about to know and or take action.

“The good news is that we do not have many cases as at now, compared to other countries, including our immediate neighbour, Senegal, as we have only registered 25 cases so far with one death, 20 recoveries and 4 active cases under treatment. We wish and pray that the number does not get any worse than this but we should also not be complacent by not taking heed of the precautions of physical distancing and hand washing measures being advised by health experts and officials,” he said.

Hon. Sillah said he is also out to hear from people their concerns regarding the enforcement and adherence to the advice given by the health officials to break the chain of transmission and as well as the challenges being encountered.

Whilst at Gloucester Street, a group of young men engaged the Banjul North Representative on issues relating to the closure of mosques and food relief distribution. On the mosques, they argued that the state should consider re-opening them since markets and transports are allowed to accommodate people. The questions were raised by Bai Cham, Habib Bah and Ebou Jatta.

In response, Hon. Sillah said he has no issues with the re-opening of places of worship i.e. mosques and churches for the normal congregational prayers to continue taking place, adding that the emphasis is that people are advised to observe physical distancing and hand hygiene in order to stop the spread of the virus which does not travel on its own but is transmitted from human to human or surface to human. “There is no problem if religious leaders can agree to arrange and ensure physical distancing, hand washing, regular disinfection and for worshippers to come with their own prayer mats in the case of mosques,” said Hon. Sillah.

Commenting on the food relief which the complaint is that some deserving families have not yet received rice, cooking oil and sugar being distributed, the Banjul North NAM said he has taken note and will do the necessary engagement and follow-up at the level of the state institution responsible for the coordination of the distribution.

One Halifa Njie asked the Banjul NAM whether people should be politicising the covid 19 issues and relegate the health dangers that it is posing to the people.

Hon. Sillah responded in the negative, adding that this is no time for partisan politics, denials, conspiracy theories and other schemes that would distract us from confronting and defeating the covid 19 disease. “Until this is over or a medicine or vaccine is discovered, we need to focus our minds and energies on how to protect ourselves from infection or transmitting it to others. We can then do or say whatever we want or believe in terms of our political interests, conspiracy theories and all what not,” advised Hon. Sillah.

The same issues relating to food distribution and closure of the places of worship were raised by a group at Box Bar Road who also received similar responses from the Banjul North lawmaker.

The group also raised the issue of weak enforcement by the state security and local government authorities at public spaces and markets, compliance by the population as well as the impact that some of the regulations have on livelihoods. “I have taken note of these concerns and will take them up with the right officials and at the right place,” assured the Banjul North NAM.

One man called Doctor said he does not believe that the covid 19 disease is in the Gambia, adding that it is all about politics by the government to get money because no one can show him up to now anyone who has been infected by the disease.

“Do you believe that all the efforts and resources being committed, the deaths and infections being reported daily at the both national and international levels are all hoax? Is it that you want to see dead bodies being shown to you to confirm that covid 19 is in the Gambia?” asked Hon. Sillah, adding “I am assuring you that the covid 19 disease is real and is in the Gambia and that I have seen facts that confirm its existence.”

At Tobacco Road or Campama Estate, the Banjul North representative engaged in discussions on issues of physical distancing and hand washing with pockets of the elderly, young people and small children (boys and girls) sitting at compound gates or playing in the streets.

The issues of weak enforcement of regulations and compliance by some people were also raised by Ousman Mboob and Ms. Mbye of Haddington Street, It was also observed by some of the people that law enforcement officials and the city council have to be more vigilant in enforcing the regulations at public spaces and markets and also for the security to send good examples in terms of social distancing by decongesting themselves at the back of their vehicles.