The 33-year-old goal-getter’s rise to Turkish second tier club Fatih Karagumruk wasn’t expected considering he was plying his trade in the Swedish third tier before this development.

A defender-turned striker, the Gambia international has fifty-eight goals to his name in two hundred and seventeen outings from 2009, scoring twice last season in three starts for Akropolis and before then four goals for Syrianska in nine matches. 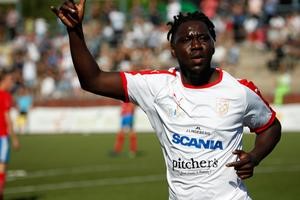 Injuries saw him suffer a decline in form soon after.

However, the latest switch believed to be a lucrative deal comes as an unexpected new challenge and a chance to re-launch his career as Sosseh plans to play in Turkey’s second most competitive league.

Fatih Karagumruk are a new outfit in the Turkish second tier having secured promotion from the third tier season before.