A RARE INTERVIEW: Jatto Ceesay Talks Gambia Coaching Ambition, His Meteoric Journey and Not Getting Enough Recognition at Willem II

He is one of those counted as a success story by Gambians and Willem II’s standards.

Emerging at a time Gambian football was in the hunt for an icon, he rose to fill in the void in a stretch spanning from 1995 to 2006 before hanging up his boots from international football in dramatic circumstances to focus on club progression.

For a man called Derr and a former player of his magnitude, information about him is somewhat sketchy. He perhaps might have shied away from media glares or the local press back home found no cause to have him chronicled in glowing details.

However, from the thin data spewed about him, his career began at Wallidan Sens now Wallidan – the most decorated domestic side in Gambia’s football history – where he auditioned in 1993 and impressed enough to be trusted amongst grown players, aged 17.

That roller coaster moment ended with Jatto plundering in a last-gasp goal on his debut in a trajectory changing his career forever as the wunderkind turned a popular figure in the aftermath of that duel.

Three years on, a skinny frame Jatto, cut his teeth on European football with Willem II. Before then, he’d been at RWD Molenbeek, an outfit then in the second division and still comprising Belgium FA’s league system prior to being recalled by Gambia’s then sport minister for a football tournament in Sierra Leone with the Scorpions national team.

Birmingham City of the English Premiership had lurked in the background around this time offering the starlet a two-year proposal, an agreement he immediately put pen-to-paper but would later scrap after a five-month wait for a work permit without success.

It was at this stage in the UK, he ran into Willem II scout Martin Van Geel, a retired Dutch midfielder who offered him a two-year in a new chapter lasting ten years on.

‘That is how I started with Willem II,’ he told Sam van Raalte of theVICE Nederland, a Dutch publication in July, surfacing now.

The Netherlands pen-pusher had reached out to the 45-year-old Gambian on the back of an intense search by fans under the harsh tag #WaarisJatto amid concerns over his welfare and whether he is still alive.

It turned out Jatto resides in Merseyside, north-west of England where he had been for six years and is taking his coaching badges with his sights on a youth coaching role with Liverpool’s arch rivals Everton under bosom Marcel Brands’ stewardship.

‘If I have to choose between Everton and Liverpool, then it has to be Everton. Because I’ve talked to Marcel Brands about whether I can do something in Everton’s youth academy. He is now a director there,’ he told VICE in a chat Foroyaa Sport translated.

Making a comparison of European kids’ outlook of the modern game in tandem with what used to obtain during his formative years in The Gambia, Jatto, delivered a telling talk: ‘Look, a lot of talented football players are born here (Europe, UK) from African parents but because they grow up here, they do have a different mentality. They have African roots, but the attitude of European children. As a result, they stay on the street late, have little respect for their parents and waste their talent. With my experience as a football player from The Gambia, I can remind them what their roots are, so that they can focus better on school and football. You cannot live a double life and make it as a professional football player.’

When the discourse turned to his struggles and rise at Willem II whom he starred over 200 times for, Derr revealed the cultural gap between Gambia and the Netherlands plus an amusing incident of a telling off on him by his coach who perhaps got disgusted with the Gambian’s obsession for keeping the ball to himself.

‘In The Gambia, the whole country talked about me. I suddenly left that comfort zone behind me. I had to accept that and it was difficult. In the Gambia, I was the star. At the training ground I could do whatever I wanted with the ball. But when I signed for Willem II, something happened that I will never forget. I dribbled with the ball all the time. The coach, Theo de Jong (a retired Dutch international and coached recently a Nigerian club), suddenly picked up the ball and gave it to me. He said: “Jatto, you only play for yourself. Take the ball home”. That way, I learned a lot. I had to adjust. That’s why I started in the first years on the bench.

‘Then I conquered my base place. If you speak to someone in Tilburg from that time, they will all say, “Jatto is crazy. He’s aggressive, nobody on the training fu*ked with him.” I made sure I got respect in the dressing room. I worked hard. I kicked someone out every workout.

Not Given Enough Credit by Willem II

The retired Scorpion cemented his place in the heart of Willem II fans during cause of his ten-year stay there reported to be the club’s era of The Invincible as they battered PSV and Ajax in the first season and competed in the Uefa Champions League.

The erstwhile Gambian captain played in all six of those European games and believes he has not only endeared himself to the team’s faithful but feels worthy of legendary status and is convinced he is ignored in that regard.

The Serrekunda-born, continued: ‘The (Willem II) supporters appreciate me because I have given my entire career to Willem II. You can check it out. I am the only player of Willem II who played all six games of Willem II in the Champions League. I have achieved all the great things that Willem II has achieved. Even John Feskens, Raymond Victoria (ex- Bayern Munich midfielder) and Joris Mathijsen (ex-Dutch international football director of Willem II) did not do that. No one. Only me. The supporters of Willem II call me the king of The Gambia. They still appreciate me.’ 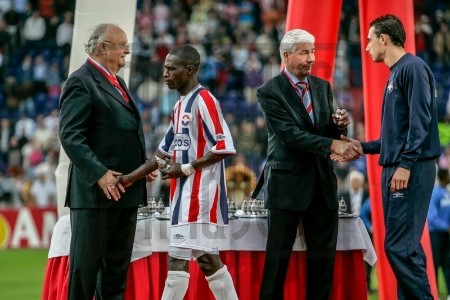 Willem II fans launched an online search for Jatto seeking to know what the man who scored 38 goals in 232 outings for them he has been up to.

When news of a search reached him, Ceesay blames the club of not doing enough to incorporate former revered players in the team’s administrative setup.

‘Yes, I don’t blame the supporters, but for the club, I do. They knew where I was. They (the club) had my number. In England, we say in such a case: “give the devil his due”, Do you understand?

‘Give me the honor, the respect. Even John Feskens has never played with Willem II in the Champions League. It is also not the case that I just bought it when Willem II achieved European success. Me and the other players made it. We worked for the Champions League, and I started every game. When we came in second and beat everyone, even Ajax and PSV, I was always in the starting line-up.

‘I played for that club for ten years. I don’t need a job as a trainer, but give me the credit. There are enough players of foreign origin in Willem II’s youth academy. Who can they look up to? I went through thick and thin with Willem II, I know every corner of the club. I could tell them (those young players) what I learned,’ he said.

At time of this interview Martin Van Geel, the man who first offered the Gambian route to Willem, returned to the club in an attempt at revamping the side. Ex- Al-Hilal attacker Ceesay received the news with surprise of a figure he owes his career to and is persuaded his former boss’ haul over will work magic.

‘Is he back? That is a surprise! He didn’t say anything about it. Nice for Willem II. Listen, Willem II was not doing well after Martin van Geel left, because there were people who knew nothing about Willem II, such as Barry Hulshoff. If Willem II is going to be successful again, it will be Martin van Geel.

‘You’re gonna see it. Martin was like an uncle to me. When Martin is with me, I can sleep peacefully because I trust him. Martin knows what I did for Willem II. Martin van Geel made Jatto Ceesay, I tell you that. He also recently introduced me to Marcel Brands, to talk about that job at Everton,’ he said.

Considered a legend in his days, Derr’s association with the Scorpions national team may have ended acrimoniously but that snag has not deterred him from harbouring ambition of barking instructions from the dug-out as Gambia’s gaffer.

‘Someday I want to go back to Gambia and become a national coach of the national team. But then I first have to gain some experience here (in the UK),’ he said.