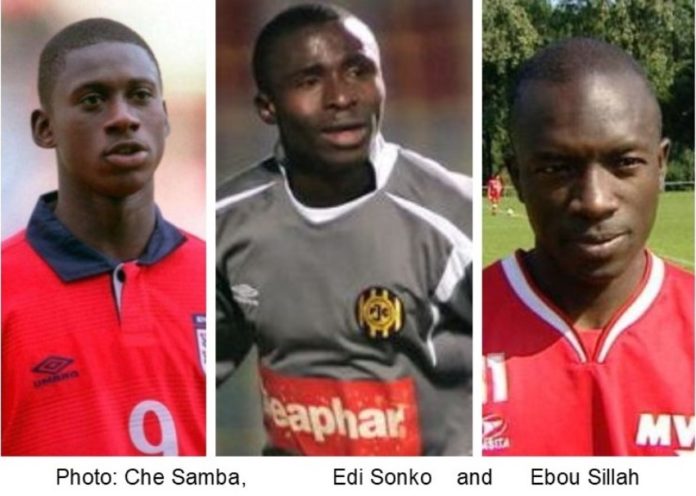 Football is a lucrative career with a short span hinging hugely on a player’s luck with injuries.

Gambia have produced incredible number of players who’ve gone on to have a taste of the European game.

However, there is always the big question of what path to follow upon retirement. As a result, tons of erstwhile scorpion internationals have disappeared into oblivion this way with little or nothing to fall back on. However, there is a new breed emerging who appear to have carefully etched out what route to take having hung up their boots.

CHERNO SAMBA: Fondly dubbed Che, Samba was born in The Gambia but traveled to the UK at an early age where he made name for himself. He never had chance of starring in the English Premiership with his closest being his near deal with Liverpool while at Millwall. Unplayable on his day, Che was a hot-cake with virtually all English outfit on his back then. However, depression resulting from his missed offer to sign with Liverpool had his career in disarray sort of. His talent was never in question however his focus definitely was. Looking back, his rise during time of which he was a sensation with England’s youth teams, still beat the imagination of pundits of how he couldn’t live up to heights his talent promised. From a potential Three-Lions’ senior team prospect to Tornsberg in Norway’s lower tier, evidently tells of a severe missing piece. He would accept to play for Gambia during the 2008 qualifiers under Paul Put. His only goal for Gambia came in a friendly game versus Tunisia in 2010 – a world class header beyond the Cartage Eagles’ net-minder’s reach after being fed by a Sanna Nyassi’s delectable corner.

Capped four times by Gambia (Liberia, Senegal, Mexico and Tunisia), Cherno –also the co-owner of Samger FC –in a recent moving interview, revealed he has no regrets over what became of his career, saying he learned only of life lessons.

Unlike majority former scorpions, the erstwhile Malaga attacker understood there was life after football waiting and planned it all out by pursing coaching badges. At 35 years, Samba and Sang Ndong –also a former squad netminder – are Gambia’s only known Uefa A License holders. Unable to endear himself to scorpions’ fans for long during his time, Cherno says qualifying Gambia as a coach to an Africa Cup of Nations will be his biggest accomplishment. For now he has Tom Saintfiet, a Uefa Pro license holder, standing in his way.

EDRISSA SONKO: The first Gambian player to sign for Anderlecht in 1999, Sonko is capped fourteen times for the scorpions, scoring thrice. Talk of few Gambians to dive into football waters of Netherlands’ top tier, he gets a mention. His best days came at Roda JC whom he plundered twenty goals for in seven seasons in a combined 112 cameos.

Pace and tricks are his trademarks and bombarded defences with it with relative ease. A Real de Banjul product, Edi, as is his sobriquet, was a household name to Gambia fans with his last association with the scorpions coming in the 1-1 draw to Senegal in 2008. With a career spanning fourteen years, the erstwhile winger knew his game will come to a halt and life after the whistle will sure greet. Preparing for this adventure which majority ex-players struggle to come to terms with, Sonko pursued coaching, bagging a Uefa B license. The 39-year-old was gunning for A license last year while being the head coach of the United Arab Emirates U14s and U1s national teams.

EBOU SILLAH: Speed, step-overs and bursting runs with shots come to mind at mention of his name. Collecting twenty-three call-ups with the squad, the Bakau-born was a mainstay and took over the mantle of leadership after Jatto Ceesay retired in 2007 prior to hanging up his boots internationally in 2008 in the aftermath of that Senegal draw in Dakar.
Tiny but not to be underrated, the left-sided midfielder’s best club days came in Club Bruge (1997-2003), Rubin Kazan (2003-2006) and MVV Maastricht (2008-2010) before he left to return to Belgium with Sporting Hasselt from 2013-2014. Ebou called it quits after waking up one day and feeling pains all over his body and made the announcement during a live TV broadcast in Belgium.

A 40-year-old now, Sillah is a youth team coach with Hasselt.

Wandeh Njie is another ex-goalkeeper who was a personal youth trainer at English Premier League side Arsenal before his heart surgery. He is wrapping up his badges as well.