The 2020 budget estimates has been approved by the National Assembly on Wednesday 11th December 2019.

The amount spent on servicing debts is quite substantial. This is recognised by the Minister when delivering a statement while tabling the estimates for the year 2020.

He said, “Debt interest payment is projected to consume around forty percent of Government’s tax revenue in 2020 compared to 26 percent in 2019, moving from 2.702 billion in 2019 to 4.648 billion in 2020. The increment is as a result of mounting debt stock, domestic debt in particular, coupled with the envisaged rolling over of some of the domestic debt.”

Based on the budget, the Gambia government expenditure for the year 2020 is estimated at over D24 billion, out of the total expenditure of over D28 billion, resulting to an increase in the national debt. The deficit of over 3 billion dalasis amount is more than the combination of several Ministries’ allocation.

This means the government is left with a limited sum to spend on salaries and other development endeavours.

Currently, The Gambia government’s total domestic debt has increased to D33 billion. Consequently, the total debt stock of the country, foreign plus domestic, has also risen to D71 billion, as disclosed by the Ministry of Finance Mamburay Njie during his presentation of the budget at the National Assembly.

The domestic debt stock continues to increase year in, year out because every year the government goes to the banks and other lenders in the country to borrow money to finance its operations. 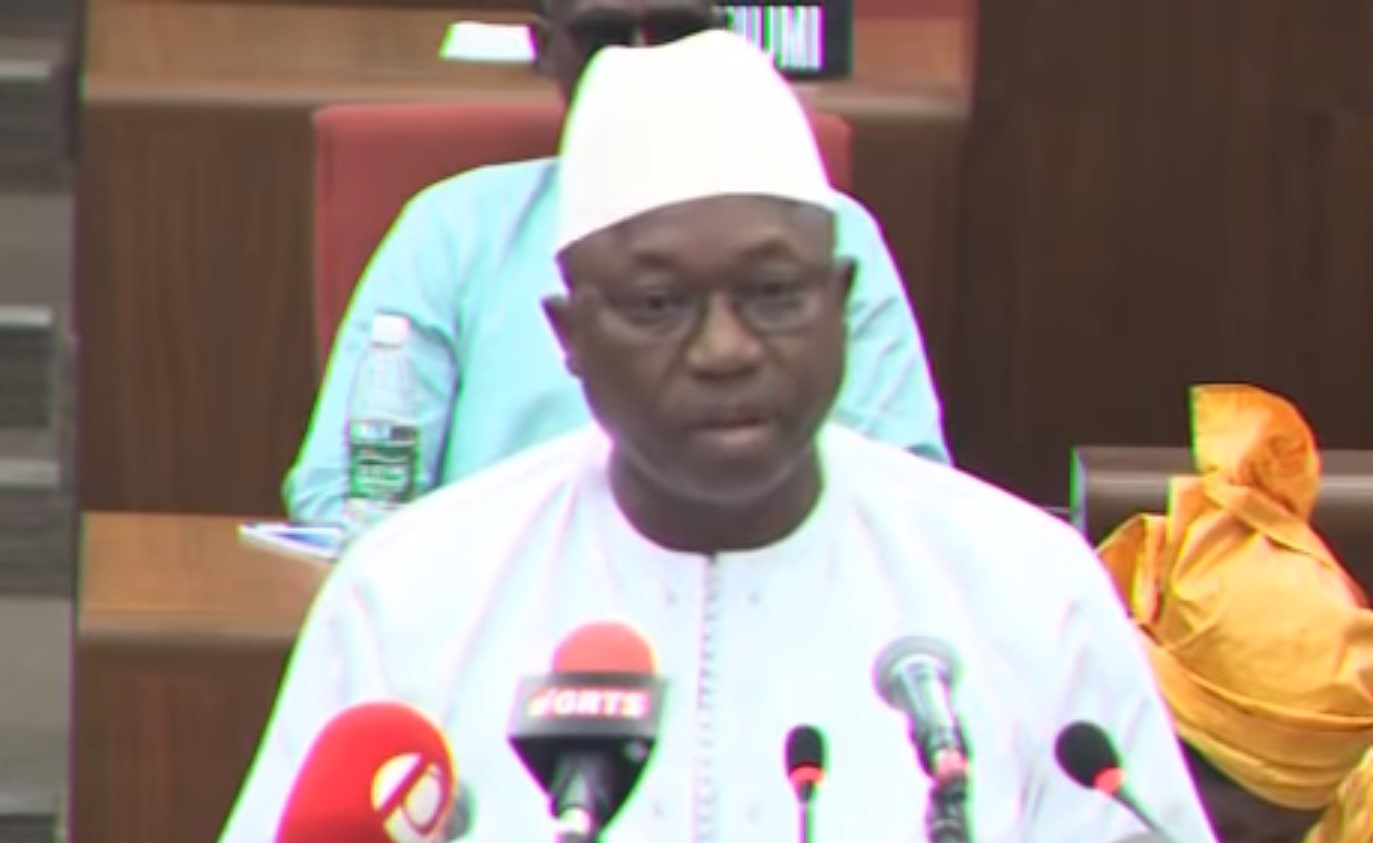 Finance Minister at the National Assembly

Sadibou Jammeh from the Gambia Investment & Export Promote Agency (GEIPA) Responsible for business development services said Gambia’s debt is as a result of the Government spending more than what it generates.
“The Government wants to do more, but have less, so they must go for debt; this is the cause of deficit financing.”
He added, “The point is borrowing is not bad, but where you spend this money when you borrow is the most important thing to consider.”
Mr. Jammeh noted that, “The 33 billion domestic debt is not small money.”
He said Deficit financing increases inflation, as such the prices of commodities will be more than the purchasing power or living standards of the average Gambian which he said is the current reality in the Gambia.
The GEIPA member of staff who is also a Lecturer at the University of the Gambia (UTG) underscores that there must be inflation in the Gambia because the money the government is borrowing is not actually what it generates. He also said they (government) sometimes bring in monies that are not necessary at some point.
He said “because we have seen that in The Gambia some of these monies will go to places that are not relevant, Prices go up and the living standards of the people stay stagnant,” which he said is not good for Economic growth.

Nyang Njie a Gambian Economist also said, “The way government borrows from the people is disturbing the Economy because people prefer giving the government their money than taking it to the bank,” adding “because what the Government gives as the interest rate is more than the interest you get when you deposit it in the Banks.”
He said this is making Banks to receive less money from individuals, making it difficult for businesses to access finance from the Banks. “When the Banks are not having enough money, it will be difficult to give out monies to those businesses,” which he said is definitely disturbing the Economy.

Ba Lamin Darboe Finance and Economics Lecturer University of The Gambia said the country is a tax based economy and that there is need to expand employment opportunities to engage the chunk of the population who are youths. This he said will widen the source of resources for the government through the payment of tax. He also added that companies should be encouraged to invest in the country to expand the employment and tax-based economy. He cited that the unemployment rate is high which about 40 percent is. Mr. Daboe noted that this is not good for economic growth.
He also said that not everybody is paying the right tax, noting the importance of expanding the business sector, which he said, encourages tax payment. He also cited the expanding of the seaport and the airport to encourage more ships and more productivity in the airport as well, which he said can help the country to generate more income.

Solutions of the Problem
The Gambian Economists Nyang Njie believes that the solution to the problem is to have laws that will put a ceiling on how much money the government can borrow each year. He said: “If this is in place, it will control the fiscal deficit.”

He also underscored the importance of debt restructuring, among which Mr. Njie said the government should try and extend the duration of when to pay the domestic debt. Citing an example on the process, Mr. Njie said for instance, the current treasury bills debt payment is pegged at 3 months, 6 months or one year and it cannot go beyond one year. According to him, the government should look into means of borrowing in which the duration of payment will at least be a longer period such as 3 years or 6 years, and within this period government will only be paying interest. He said this will give the government enough time to generate more funds to be able to pay its debt.

The National Assembly member for Banjul North Constituency raised the issue of the increase of Gambia’s debt during his intervention on the debate of the 2020 budget estimate in parliament. He told Finance Minister Mamburay Njie that despite the hikes on the debt, “I have not seen any efforts made by the executive towards reducing this colossal sum, but instead the executive is bent on contracting more loans that would increase this loan portfolio.”

Honourable Sillah said governance, management of the economy and service deliveries to the citizenry are challenges for the country, adding that it is important to focus on these sectors with the objective of addressing the challenges in those sectors.
He tasked the current administration to launch a crusade towards ensuring that the government moves away from contracting loans and grants and invest in the productive sectors of the economy.

Sillah emphasized: “These are three challenges of the government and the executive should take note and do its utmost to address these challenges. We should rationally look into this and provide remedies. The upkeep of the State House and the Office of the Vice President are in the tune of 20 and 3 million dalasi”.

He recommended for Parliament to look at the budget lines for the State House and the Office of the Vice President, adding that what is budgeted for the two offices is staggering and over the mark.

He remarked: “We can make enough savings and divert it to other sectors such as health and agriculture, as well as reduce borrowing.”

He urged the government to take the lead role and encourage the private sector to ensure that investment is made to empower young people as well as the development of the informal sector, to ensure budget sustainability and reduce the trend of contracting loans and grants for national development.

Mr. Jammeh citing some of the solutions to these problems said even if the government had to borrow, they should consider investing it more into the productive sector. He said the government should also encourage more on re-export, recalling that in the 1980s the Gambian economy was doing well due to the high-re-export of goods and the country was well known for re-export trade due to its strategic location.

“A lot of West African Nations used to import their goods through the Gambia, which is cleared here, and later re-exported to these various countries such as Senegal, Mali, Guinea-Bissau, Guinea Conakry Mauritania among others.”

He said the re-export trade has helped Gambians to earn a lot of Revenue from it because it was a good thing for our productive sector.

He cited Agriculture as a key sector that produces at least 23 percent of Gambia’s Gross Domestic Product. Mr. Jammeh said the 2020 budget allocation is low, asking whether the government should be spending more money on productive sectors that can generate income for them or sectors that consume more money; adding that they should also reduce spending on many of the existing Gambian Embassies abroad.

He added: “I think Government should definitely reduce the embassies and the monies to be diverted into the productive sector and increase the value in Agriculture, so that government’s revenue will increase and it will reduce borrowing.”

According to him, The Gambia is small but during the colonial period it was indeed a hub for trading. He added The Gambia needs to exploit this advantage which is an endowment.
He also said the government should utilise 50 percent of the country’s freshwater for agricultural production. This, he said, will generate more impact and boost economic growth. Mr. Sadibou Jammeh said Countries like India have taken a lot of money from deficit financing and invested into their productive sectors such as agriculture for many years and it has yielded a lot of revenue for them. Now they borrow less money and produce more revenue for themselves.

Nyang Njie said deficit financing is not bad, but the only bad thing is if you borrow and put it in recurrence expenditure such as payment of salaries, travel expenses, payment of rent for embassies abroad among others. He said the monies spent goes out without reproducing. “The Gambia should reduce borrowing money for recurrent expenditures. These amounts of money government is borrowing and putting them in the recurrent or unnecessary expenditures, will be paid by generations yet unborn”, Mr. Njie remarked
The UTG lecturer Mr. Darboe said in last year’s budget, the government put zero tax on rice but still now the price remains the same. The reason for this, he disclosed, is because there were ships with rice in the sea waiting to dock in a longer period and they had to pay more expenses because of the longevity of their stay; noting that, the supplier still incurs expenses. He believes that the main thing is to expand the seaport. “It is one of the key areas that can generate government a lot of money, as well as the expansion of the airport.”