‘What Will Become Of Bakoteh Dumpsite In 2019?’ Residents Ask

Resident closed to and around the Bakoteh dumpsite, told this reporter that the smoldering and bellowing smoke that used to come from the dumpsite to pollute their environment, has reduced but not stopped completely.

The dumpsite has been on the timeline of the new dispensation’s development agenda since the time they came to power. Since 2017 until recently, residents close to the dumpsite called for its relocation or proper management, and still want to know what will happen to the site. President Adama Barrow who visited the dumpsite, promised that his Government will act to improve the situation of the site. 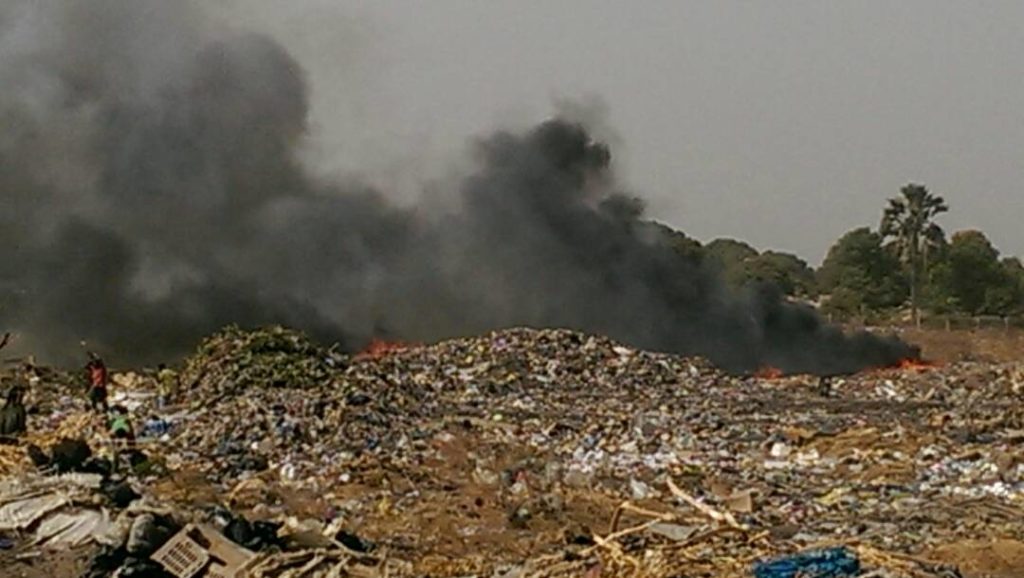 This reporter visited nearby compounds close to the dumpsite and talked to residents like Binta Kinteh, who is staunch and bitter complainant of the site, and the health hazard it poses to them and their families. Binta told this reporter that a lot has improved at the site now, unlike before; that smoldering and clouds of smoke that used to emanate from the site to wreak havoc on their health and that of their families, has reduced, including the foul smell. She added that a further control of the smell from the site will add to the already registered improvement. Binta said whatever is brought to the dumpsite now is bulldozed and grounded; that anytime smoke is noticed, the site security is immediately informed to put it off. She added that better foot paths within the dumpsite has been provided unlike before.

Dumpsite Supervisor Muhammed Sanyang together with his five Municipal Police Officers, said they tour the whole site every morning, to see what has happened.

Sanyang warned that whosoever is caught wanting at the site, will be arrested and handed over to the Police. He said smoke and the foul smell are things of the past; that now they make sure any vehicle bringing waste, is checked by the Municipal Police stationed within carcasses of dead animals and possibly dumped babies; that for carcasses of dead animals, there is a place within the site where they are buried.

It could be recalled that at a press conference marking the Mayor’s 100 days in office, Mayor Talib Bensouda said the KMC, Brikama Area Council and Banjul City Council, have established an inter-municipal committee to work on the eventual closure of Bakoteh dumpsite and to put in place a joint strategy for waste management. Mayor Bensouda said the KMC faces the challenge of dealing with the numerous illegal dumpsites within the municipality, as a result of illegal dumping.

Mayor Bensouda said he has instructed the administration of the municipality to continuously clear all illegal dumpsites; pointing out that the Bakoteh dumpsite causes serious environmental pollution and is a public health hazard to residents of the communities surrounding it.

The reporter will seek the views of Councillors and National Assembly members of Constituencies within the Municipality, on the issue.

By Makutu Manneh Stalls at the Bakoteh Bridge were on Tuesday between the hours of 2pm to 3pm demolished by KMC Municipal police, who took...
Read more
FOROYAA Newspaper is your premier Gambian community portal delivering news on politics, legal affairs and more. We provide you with the latest breaking news and videos straight from The Gambia and the rest of the world.