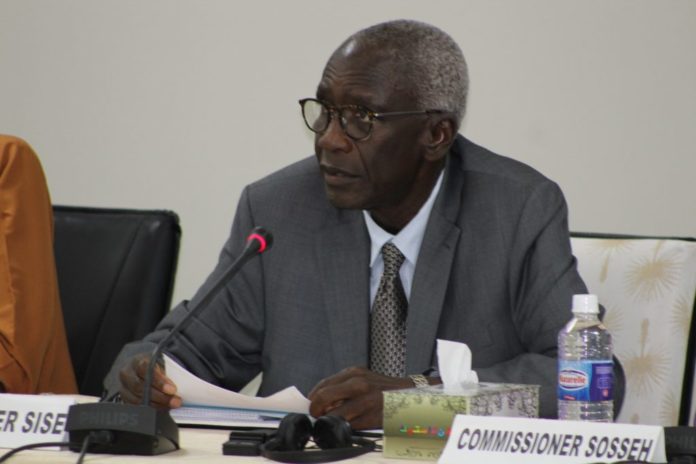 It is the TRRC’s firm conviction that all victims of human rights violations that occurred between July 1994 and January 2017 will get the justice they deserve, said Dr Lamin J Sise, Chairperson of the Truth Commission on Monday.

Below is the full text of the Chairperson’s statement in verbatim.

Today Monday, 22 March, 2021 the TRRC will begin its 22nd session of public hearings. As at the end of the 21st session, the Commission had heard testimonies from a total of 358 witnesses. Of these, 285 were male and 73 were female. Out of the total number of witnesses appearing before the Commission so far, 216 were victims and 75 were self-confessed perpetrators and adversely mentioned persons. Twenty-nine witnesses have testified via video link from the Gambian Diaspora. The public hearings of the TRRC also included protected witnesses as well as witnesses who testified in camera.

As we begin today what could be the last month of the public hearings of the Commission, we would first recapitulate the highlights of the two themes we examined during our last three sessions. In view of time constraints, we delayed review of the highlights of the two consecutive sessions devoted to the National Intelligence Agency (NIA) which ran from 22 October, 2020 to 23 February, 2021 and was part of the general theme on Institutional Hearings. The Commission paid careful and thorough attention to the NIA as it was the entity, together with the murderous squad called the Junglers who were during the mandate period of the TRRC (i.e. July 1994 to January 2017), responsible for the greatest number of gross violations and abuses of human rights in The Gambia.

It would be recalled that the constituent Act which established the Commission (TRRC Act, 2017) defined human rights violations or abuses as including “the commission of acts of torture, unlawful killings, sexual and gender based violence, enforced disappearances of persons, inhumane and degrading treatment, arbitrary arrest, detention without trial…” and ordering, instigating, inciting, aiding and abetting, counseling or procuring any of these acts. Yahya Jammeh and his cluster of confederates at the NIA and among the Junglers committed all these acts during twenty two years with undisguised wickedness against the citizens of The Gambia with impunity and total disregard for the rule of law. Testimonies from the victims during the NIA public hearings, albeit different, were not a series of unrelated cases. They showed a consistent pattern of gross violations and abuses of human rights by the agents of the State. It was also clear from witness accounts that the actions of these agents weren’t the product of individual decisions on their part but rather a calculated and intentional policy of Yahya Jammeh to consolidate and perpetuate his reign of terror and fear in The Gambia.
Some witness perpetrators testified that they themselves would be killed if they did not carry out superior orders to torture detainees to unlawfully obtain confessions. The torture meted out reached its crescendo when the detainee was accused especially of being part of a plot to overthrow Yahya Jammeh. It is the old story of feeding the crocodile with innocent people, hoping that the storm of dictatorship would pass before their turn comes to be devoured by the reptilian beast.
Against this background of fear and paranoia of the all-powerful man in The Gambia, Jammeh’s brutality reached a new height in July 2005 when, according to witness testimonies, the President of the Republic of The Gambia ordered the killing of nearly fifty unarmed West African migrants who ostensibly were on their way to what they perceived as greener pastures in Europe. They were given short shrift and mercilessly tortured and slaughtered in The Gambia by Jammeh’s agents. Again, according to witness testimonies before this Commission, on orders by Jammeh. He and his Government mendaciously claimed, and informed the government of Ghana, the United Nations, and ECOWAS, that the innocent and unarmed migrants were killed by “rogue elements” in the Gambian Army. The killers were not part of any renegade unit of the Army. No such unit could exist in the Gambian armed forces under Yahya Jammeh. The Junglers, some of their members in testimonies before the TRRC, confirmed that they got their orders from and reported directly only to President Yahya Jammeh. The truth of what exactly happened to the migrants became a big casualty of this tragic episode. But alas, like the proverbial prophet, Martin Kyere, the sole survivor from among the migrants, lived and traveled over land and sea, including appearing before this Commission, to tell mankind what happened in The Gambia in late July 2005. May God lead us from these negative and brutal attributes that led to the slaughter of innocent strangers who landed on our shores. These attributes did not represent The Gambia. Our cultures, ethos, and traditions welcome strangers. We share food and shelter willingly with them. Not kill them!

The killing of the West African migrants adds to the chilling litany of mass murders of human beings in addition to individual killings in The Gambia during the mandate period. Here is a partial list of the killings.

3. Presidential Alternative Treatment Programme, PATP HIV/AIDS  (over 30 vulnerable individuals suffering from the infection died during or shortly after leaving the fraudulent treatment administered by President Jammeh himself, an untrained and uneducated medical personnel)

4. West African Migrants (Nearly 50 innocent migrants killed by Gambian Security Forces allegedly on orders given by President Jammeh in July 2005 and buried in unmarked areas in The Gambia and reportedly also in the Casamance in southern Senegal)

5. Extrajudicial killings of Prison Inmates (9 in 2009 at the Mile Two Central Prisons)

There was absolutely no reason for these deaths. We as a people, every single Gambian, must resolve to embrace the TRRC mantra: Never Again! Never Again!

As we get closer to the end of our public hearings, this Commission reiterates its firm commitment to executing its mandate to the fullest possible extent. We hope to finish our final report, and submit our findings and recommendations to the Government of the Gambia during the first week of July. Ultimately, it is the TRRC’s firm conviction that all victims of human rights violations that occurred between July 1994 and January 2017 will get the justice they deserve. We invite you to join us on this last leg of what has been a highly revealing sojourn into our recent past – a past, unfortunately, that was marked by rampant violations of the human rights and dignities of Gambians by the State.

The TRRC has not been deterred and will not be deterred or intimidated in carrying out its mandate until we safely conclude our work.

Thank you for your kind attention.