Market Vendors Protest Against Death of their Colleague

Over a thousand protesters demonstrated at the Serrekunda Market following the untimely demise of a vendor, Ousman Darboe, a Sierra Leonean.

A father of two, Ousman until at the time of his untimely demise, was a trader of mobile phones, laptops and as well does repairing. He is married to a Gambian. 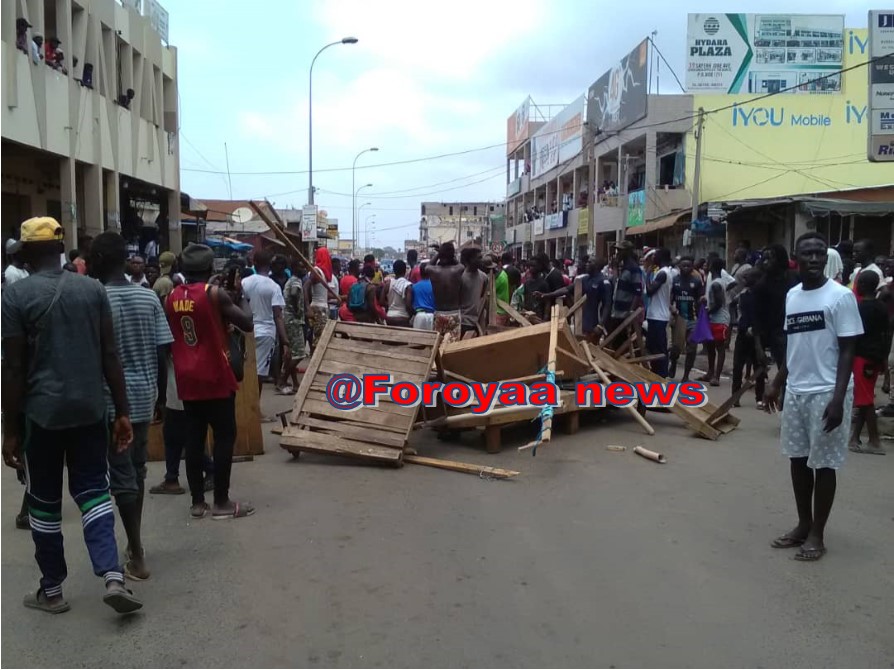 At around 10 am, over a thousand angry youth gathered in the heart of  Gambia’s busiest market (Serrekunda market) to protest over the death of Darboe. Protesters were having banners with the slogans: “Say No to Police Brutality”.

They were also heard chanting: “We don’t need Anti-Crime Unit in our society; they are secret killers. We don’t need another brutality or dictatorship that would continue killing young people,’’ “we are here to remind the Anti-Crime that justice is needed for the family of our colleague.’’

At the main junction of the market, vendors were seen with stones as they assembled on the street to show up their anger against the death of Mr. Darboe. According to the protesters, they came out in solidarity with their demised colleague, but within minutes, a pickup carrying personnel of the Police Intervention Unit (PIU) was deployed to control the angry crowd. 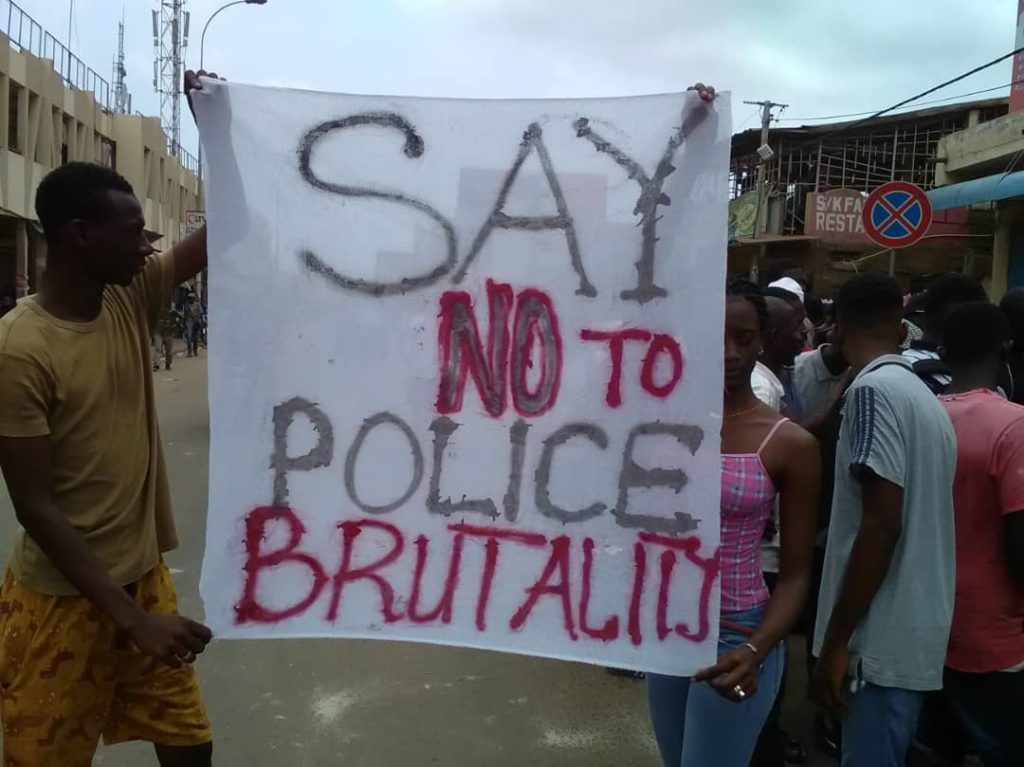 Protesters started stoning the police around 12 pm, asking them to leave so that they could exercise their rights. The angry protesters alleged that their colleague was brutality maltreated by law enforcement agents. Police then fired teargas at the protesters to disperse them and some of the demonstrators ran away. The crowd also continued throwing stones at the officers and Serrekunda Police Station.

The crowd was dispersed and secret Police (men in civilian clothes) started arresting some of the protesters. This reporter witnessed some arrests including the arrest of a young man. This young boy was beaten by the police at the time of his arrest as they took him to the Serrekunda Police Station by officers in mufti. Also, the reporter witnessed some other arrests by the police.

The police were able to control the crowd following the dispatch of another PIU pickup from their unit. Protesters thereafter proceeded to burn the house of Anti-Crime boss, Gorgi Mboob and later return to the market to continue with the protest. The stoning and tear-gas firing continued until a PIU officer and passer-by were injured. Officers in civilian clothes were seen taking pictures of the protesters who were stoning at the PIU personnel for identification so that they would be arrested later. 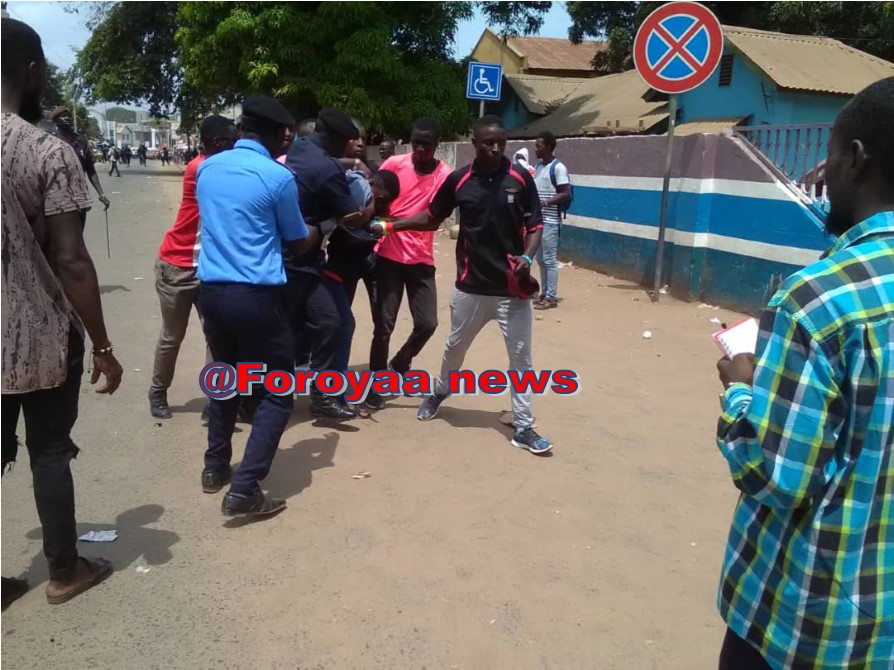 When the police brought another deployment, the angry protesters were seen burning down carton and plywood on the street whilst others were on the other side as they marched towards ‘Bambo’ demanding justice and accountability for the death of their co-worker, but the Police continued to disperse them.

The crackdown led to traffic jam and vehicles were asked not to use the Serrekunda road.

36-year-old, Ousamn Darboe, a resident of Dippa Kunda who owned a shop at Serrekunda market alleged that the death of their colleague was as a result of cruelty he received from officers of the Anti-Crime Unit. However, this could not be independently verified by Foroyaa.

During a visit to the deceased home, family members, friends and neighbours were seen in the compound weeping for the untimely demise of Mr. Darboe. His wife Binta Jaiteh, who was seen in tears, described the incident as shocking and heart wrenching. Madam Jaiteh while explaining how the incident occurred, said her husband told her that his colleague came to his shop with a TV and asked him to borrow him some money.

She said: “my husband gave him the money but he never knew that the TV was a stolen property. A few hours later, he received a phone call from the Anti-Crime headquarters in Bijilo that he (Ousman) is wanted.”

“I didn’t see him for three days; I then begin to search for him. I called his close friend who suggested to me that we should check the Anti-Crime office. On our arrival, we enquired about him and the officers we met on duty confirmed that he was held under their custody, but we cannot see him. On our second visit, the officers on duty only allowed his friend to see him while I was denied access,” she emotionally expressed.

Following the release of her husband, according to her, Ousman was complaining to her about some pain on his body.

“I used hot water and mentholated cream to rub it all over his body.  Any part of his body I touch, he will complain of pain,’’ the young lady said, while in tears.

She indicated Ousman was later taken to see a doctor by his family members and medication was prescribed for him as he was asthmatic.

“I felt very bad for the death of my Ousman because he is the sole breadwinner of the family. He pays school fees for our children. He has gone at a very early age, so now who is going to support our children,’’ asked Binta.

“I need justice for my husband. I’m a Gambian and therefore, all those who participated in the killing of my husband should be brought to book and let justice be served.”

She threatened that if the State fails in its responsibility to ensure that justice is served, the family will sue the government.

The President of ECOWAS Citizens in The Gambia, Michel Pokpaye Koivogui, was conducting his fact-finding for the death of the Sierra Leonean. He described the incident as unfortunate and sad.

“I can’t tell you anything for now, but we will follow up the matter with the authorities and an investigation will also be conducted,’’ he said.