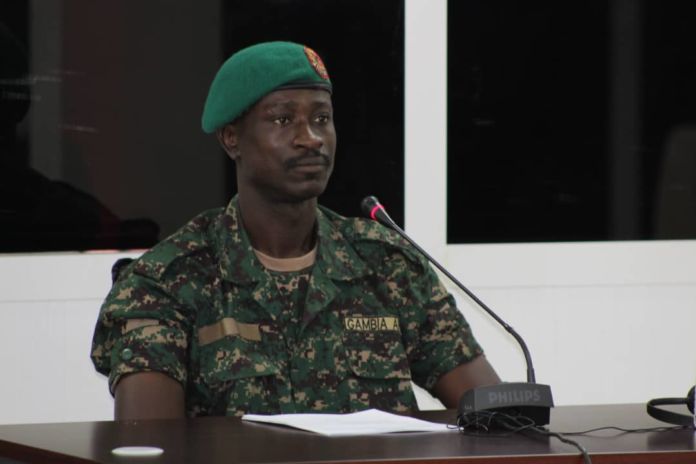 Alieu Jeng, an erstwhile member of the Yahya Jammeh’s hit squad alias the “Junglers” has changed his earlier testimonies before the TRRC by admitting to some of the tortures and killings he has participated in during the 22 –year rule of Yahya Jammeh.

The 40-year-old soldier appeared on Monday, 19th August 2019 before the Truth, Reconciliation and Reparations Commission (TRRC) to conclude his testimony with regards to his participation as a “Jungler”. Jeng joined the Patrol Team dubbed the “Junglers” squad in 2004 and stayed as an active “Jungler” until 2009.

On the killing of these West African migrants, Jeng said he was called and told by his seniors that some mercenaries were captured, adding that Solo Bojang headed the operation where the captured migrants were slain in a bush somewhere around Foni – sometime around 2005.

The witness said: “To be candid, I cannot state their exact number because it has now been a long time.”

He said these migrants – victims were taken to the forest where they were killed by Malick Jatta and Sanna Manjang. He testified, “I was responsible together with Omar Jallow alias Oya of taking the victims to Jatta and Manjang who were executing them. In effect, I accept participating in the killings of 30 West African migrants together with Sanna Manjang, Omar Jallow and Malick Jatta.”

The witness said throughout his services as a “Jungler” they did not do anything that did not come from the ex-President Yahya Jammeh through their chain of command.

“The instruction to kill these migrants came from the government,” the witness said.

About the Killing of Haruna Jammeh

He had earlier denied participating in the killing of Haruna Jammeh, but in his testimony yesterday, He said after Haruna Jammeh was picked from the NIA, he was taken somewhere where Sanna Manjang instructed them to force Jammeh on his knee and he (Manjang) suffocated him to death.

Killing of Malafi Corr and Others

He said he was briefed about an ongoing coup in 2006 and he went to State House where he picked his rifle. He said on that day, he was with the Quick Resistant Force and on the following day, he was sent to the National Intelligence Agency (NIA) as a guard. He said he was sent home by Tumbul Tamba to wait for further instruction, adding that after some days, Tumbul sent for him.

He said Tumbul briefed the entire team that they are going to Mile II, but he did give them the detail of the mission. At Mile II, the witness said Tumbul went inside and held discussion with the authorities there and later came out with some of the detainees.

“I thought they were going to be taken to Mile II but when they came out, we headed towards the Denton Bridge,” the witness told the TRRC.

He said he couldn’t tell whether they were cuffed or not because it was dark, adding that plastic bags were put over their heads. He said they were taken to a forest in Foni where they were killed.

“When we reached the forest, the vehicle lights were put off. The vehicles were put off and I was instructed to guard the vehicle together with Nfansu Nyabally. I did not go to the execution site,” the witness said.

He said those taken to the forest were Malafi Corr, Daba Marenah, Masireh Jammeh, Alpha Bah, Alieu Ceesay, Julia and Ebou Lowe. He added that on the following day, it was announced over the radio that these people escaped from an accident which according to him was a lie by the government to cover up their action.

“I agree that I have participated in several tortures because we used to bring sticks for our seniors to torture the detainees at the NIA,” he said.

He said he was moved to the Office of the Vice President sometime around 2011 and since then, he has not participated in any of the “Junglers” operations.