It’s nine years since Alasana Camara plundered in a decisive winning goal to win Gambia the African U-17 title in Algeria. The mammoth striker ran deep into the box then outmuscled his marker before letting fly a screamer with his favoured left foot that beat the Desert Foxes’ net-minder into the net. It was Gambia’s second Caf youth title in four years after the first in 2005. 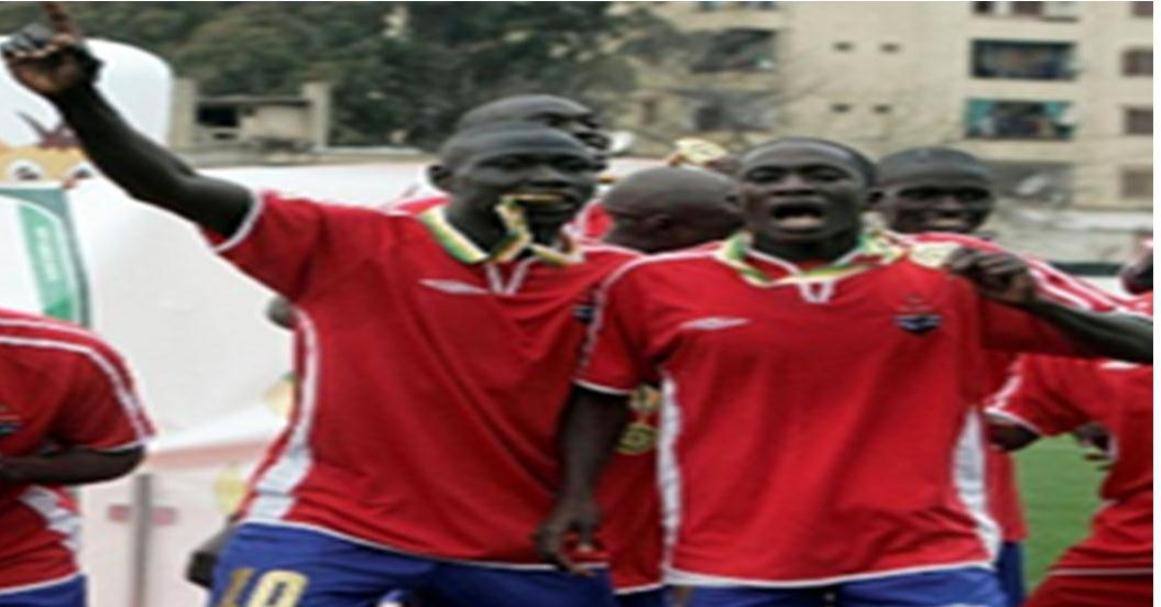 Sitting on a wooden bench and clad in a long-sleeves white-patterned shirt amidst freezing temperatures, memories of that historic moment flooded back in all their genuine freshness as Alasana reminisces about that eventful day.

The team jetted back to Banjul to fanfare with hopes abound that Gambian football is, after donkey years, finally on an upward trajectory. Erstwhile statesman Yahya Jammeh, determined not to be left out of the Jamboree, upstaged the celebrations by forking out a million dalasis to each member of the winning team. A feting then followed to cap off a night of excessive razzle-dazzle.

The triumph in Al-Blida was expected to mark beginning of an illustrious football career for Alasana as the Baby Scorpions prepared for the FIFA U-17 World Cup which Africa was hosting for the first time in Abuja.

Then a storm gathered and a hush fell. The heavens opened and the first wave of thunder struck. Word went round that Egyptian coach Tarik Al Siagy has inexplicably dropped a chunk of the Caf Cup winning team and that Camara, joint-top scorer of the tournament on four goals, was one of the biggest casualties.

The Football Association, under Seedy Kinteh’s tutelage then, wasn’t forthcoming on offering an explanation, giving rise to varying stories about what may have prompted the mass axing of notable stars of the squad. Only few players namely, Pateh Nyang, Ebrima Bojang, Lamin Basmen- Samateh and Kemo Fatty that featured in the African tourney survived the trimming. A new batch which included Alieu Darbo formerly of Le Mans –the sole foreign-based player in the team –were recruited as replacements.

Reports from the grapevine had it that Alasana and others failed a bone-marrow test detected only following the team’s return, an assertion the player slams as a farce, suggesting coach Tarik Siagy was undermined and forced to accept players he didn’t select.

‘That was my biggest problem (being dropped in the U-17 World Cup squad just after winning the African title in Algeria). I would have left football that day completely, as I was left shattered. I couldn’t comprehend how one could go to Algeria, win a trophy there and come back to the Gambia preparing for the U-17 World Cup in Nigeria only to be told you’ve been dropped,’ Alasana said, giving his version of events about what occurred behind the scenes in a bid to unlock the mystery.

He continued: ‘I thought about it severely but I am until now yet to find answer to this. I was still attending training sessions after been dropped (from the U-17 team) but I couldn’t come to terms with that verdict. It affected me psychologically but I hid it from those around me. That moment changed me forever. I’m confident it would have been a different story if I had gone for the finals in Nigeria. Our Egyptian coach Tarik Siagy couldn’t comprehend it all himself. We (the dropped players) had a meeting with him. When we enquired whether we were axed from the team, he said no we’re not.

‘Players meant to be dropped should have been told long before the team jetted out for Algeria. I can’t say much about this as I was trimmed to make way for others and it might be given a damning interpretation now that I’m talking about it.

‘The coach was as dumbfounded as us. He was so angry that he almost resigned but we pleaded with him to stay. It wasn’t the MRI test at the time as many claimed. That team was a Sunday team –the players were all fighters and hard-working. If you’d taken out a player from that our team, you’d realise there would be a visible gap. Every game we played in Algeria the players were made to undergo the bone-marrow test (MRI). So you can’t say our removal from the team was MRI related. If we were above the age bracket, it would have been made known in Algeria or exposed there in Al Blida. All the lads were scanned, myself included. So our dropping remains an unexplained mystery to everyone to this day. Our goalkeeper Musa Camara of Gamtel (also trimmed) cried profusely. I too cried but I had to console him. It was a sad chapter in our lives. I can’t explain that mood in the camp. Many of the players would have quit football after that but most continued because they were encouraged by friends and loved ones.’

On the millions doled out to them as gift by Jammeh, he went on: ‘The players were all delighted over the millions. We all received a million each and I think most of the boys bought lands or properties with it.’

An unusual burst to the scenes

Now 24, the left-footer’s burst onto the scenes had many bewildered. A typical Gambian player will rise through the ranks with nawettan football being the first port-of-call. Alasana did not tread those paths, walking his way straight into hometown First Division club Steve Biko’s first team after just two training sessions with them. The former Gambia youth international caught Tark Siagy’s eyes on his league debut against Wallidan in the summer of 2008. This set the pattern, signalling the start of an untypical football journey before the debacle in the build-up to the U-17 Nigeria World Cup.

Having scored four goals finishing as joint-top scorer with Ebrima Bojang in Algeria, the attacker had trials in number of European countries among them in Spain with Deportivo La Coruna. His 15-year age was stumbling block on his path to inking a contract. The closest he came signing was in Turkey where he had an audition with then teammate Lamin-Basmen Samateh.

‘I have been to a lot of countries on trial. I can’t remember them all or the club names between 2009 and 2010. I will do all I can on trials but coaches always told me my age wasn’t favourable. They would tell me ‘we can’t sign you and keep you here for the next two years without playing for the first team.’

Following four years of attempts without headway, the Gambian finally had his crack on football abroad when he turned 18, signing with Finnish second tier side KooTeepee. However, that brief relief lasted barely a year.

‘Hatib Janneh (a businessman) was behind my move there in Finland. He helped us to go there but the agent Karik, believed in money more than us the players. The agent didn’t fight cause of the players as he should and if we tried calling him, we can’t get him. I only spoke to him once. But when he needed us, he will reach us immediately. I was there with Pateh Nyang. It was a difficult moment. The coach badly needed Pateh in the team but he picked up a groin injury while I played. It was just a matter of luck nothing much,’ he elucidates, leaning back on the bench, we were seated.

‘Jarra’ as is his sobriquet, later left the team having grown disillusioned over the shocking paltry wages accorded to players in Finland.

From an African Youth champion to a fisherman

There’re blizzards of tales of one-time Gambian players seating and idling by after seeing their soccer dreams hit the brick walls. For Alasana, indulging in a self-pity or lackadaisical attitude doesn’t fit his persona.

Returning to Banjul in 2013, he opted to revert to fishing, a trade he had nine-year experience in prior to taking up football.

The Bakau beach, a five-minute’s drive from his residence, is now his only source of livelihood. A popular figure around the fishing centre, Alasana would hop into his vessel with crew members between 12 to 5pm for his daily catch for sales the following day.

‘Since returning (from Finland), I have been fishing. I am a ship captain. Since I’m not playing, this is now my source of living. Fishing is my profession and livelihood. Since football hasn’t worked for me yet, I can’t sitt and while away my life in pity,’ he said.

Asked how much he now earns compared to the figure he pocketed as a footballer, Jarra dodged the bullet.

‘There is lot of money in football. I like fishing but I prefer football over it. The profit I make in fishing?… I just thank God for it. With the sales I have in fishing, I am able to solve my problems at least; I’m feeding my family well with it. I know how much I make from it but I can’t disclose the amount.’

Topic of his rejection from the U-17 popped again when posed the question as to whether he harbours resentment over the thought of not playing in the very pinnacle of football where few of his ex-mates had managed to reach.

‘I’m actually sad that I am unable to play at the top level but that is how God planned it. Cameroon’s Vincent Aboubakar who now plays in Turkey is one of the players I have shared the pitch with. I would have loved to be doing more than him but like I previously said, that dropping before the U-17 World Cup is unbearable. I can’t even say a word of it to anyone to this day. I was in the height of my powers that time and if we had been to the World Cup, you would have seen something else.’

Of that 2009 Caf youth Championship trophy-winning Gambian side that torn hosts Algeria apart, only three are still stuck to the ball. Omar Colley, current national senior team captain, is the most successful among the trio as he plies his trade in Belgium while the remaining two, Saihou Gassama and Lamin Samateh, craft their trade in Spain’s third tier and in the Tunisian League respectively.

His answer was straight. ‘Funding issues.’  ‘The problem with Gambia football is lack of funding and development particularly the league. We lack sponsors. If we’ve had sponsors in the sport, Gambia is like Brazil.’

Last year, the forward played for the first time after five years off the pitch, fielding for Bakau in the FIBank sponsored-Super Nawettan. So, has he any intentions to play further than this in the future? ‘I can play even in the next five years. Football doesn’t worry me,’ he concludes. The striker’s narrative encapsulates defiance and all that represents heroism in a world of limited opportunities. It would be business as usual for Alasana when he sets off to the Bakau beach for his fishing today.