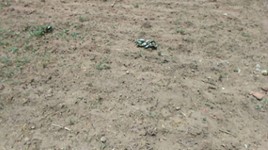 The current dry spell across the country is posing threats to the production aspiration of farmers as they commenced planting on their farms. It has now reached two weeks since the last heavy rain in most parts of the hinterland and farmers fear that the situation may potentially affect the harvest they anticipated, following reports that this year’s rainfall is predicted to be higher than the previous year.

As this reporter visits farms across the Upper River Region, he has discovered that some germinated crops such as maize, groundnut and coos or early millet, are gradually wilting away.

The reasons for the dry spell as advanced by scores of farmers, includes the cutting down of trees (deforestation) without replacement.

This does not only impact negatively on the rainfall pattern but also exposes the soil to erosion, thereby depleting farmlands of their essential soil nutrients which consequently results in poor harvest.

Mawdo Sowe, a farmer in Jimara District, told this reporter that he has sown his three hectare groundnut farm well before the Muslim’s feast of Tobaski, but said due to the dry spell, vast area of his farm has not germinated.

“This results in sowing two to three times until such time that the sown crop properly germinates. This also leads to a late reaping of crops and also leads to poor quality produce. By the time the crops start proper germination to produce, the rains would have stopped or come in a very little quantity,” he said.

Alhagie Ceesay, another farmer from Wuli West told this reporter that some farms in his area have been seriously affected by the dry spell.

He said the price of fertilizer this year is expensive and that most of the farmers in the cannot afford it.

“We use fertilizer to supplement lost soil nutrients due to continuous cultivation of our farmlands for a very long time. The price of fertilizer ought to be affordable so that farmers increase their production,” he urged.

Nyima Camara, a farmer from Sandu Diabugu, also explained that at present, their crops need water to properly germinate, so that they can proceed with other post-planting operations such as weeding.

“Currently, we should have been occupied with weeding our farms but the non-germination of our crops due to this dry spell is compelling us to wait until we attain success in planting our crops,” she said.

While decrying that the price of fertilizer is exorbitant, she urged stakeholders to look into the matter in order to further reduce it to an affordable price below D2,000.

Foroyaa is currently touring some farming communities in the provinces and will inform the readers on issues regarding the rainy season as it gathers on this important development on the farming season.