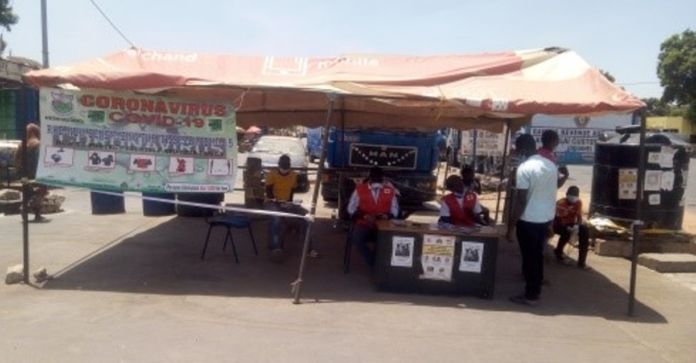 Sang M. Jarju, the Desk officer at the Amdalai Border Post said the isolation room given to them by the authorities, lacks water and electricity supply.

He added that the isolation room was erected during the Ebola outbreak and the solar equipment installed therein since 2014, has rendered the batteries dysfunctional; that no water is available in the overhead tank to supply the Post.

Jarju made the disclosure during this reporter’s visit to the said border post last week to access the level of the border closure and the preparedness of the staff in the fight against the Corona virus.

“We work in the open because we do not have an office space,” Jarju told this reporter; that the Health Minister who visited them, decided that they should be stationed like that so that they could be the first receivers of every traveler coming from Senegal; that the office space they have is shared with four other department units. He said adequate office space will be easier for them to work effectively and to isolate anyone they deem has the virus.

Jarju said they are also running out of supplies such as gloves, masks, aprons and hand sanitizers; that they cannot do any surveillance without the items he has indicated.

It could be recalled that Banjul and Dakar mutually agreed to close their borders in a bid to control the spread of the deadly Coronavirus for twenty one days. And within this period, the Ma Foundation of China brought in some needed supplies in gloves, masks, hand sanitizers and nurses’ gowns as donation to the Government of the Gambia, through the Ministry of Health and this Medium is of the view that these much need supplies should have reached some of these areas by now.